Main Jail South, opened in 1956, has a rated capacity of 674 inmates and is designed in the older linear style, complete with bars and tiers. This indirect supervision model, although popular in the 1950s, is generally not the norm in modern jail settings because officer-inmate interaction is minimized. Included in the Main Jail Complex is the North County Facility located in the Palo Alto courthouse. This jail is operated daytime only for inmates with cases in Palo Alto. 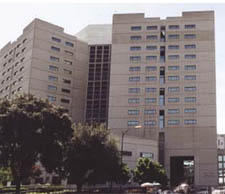 Main Jail North, a third generation correctional facility, uses the "direct supervision" inmate management model. Direct supervision is a concept that combines architectural design, specialized staff training, and an inmate management system based upon positive behavior. In this environment, one officer oversees a locked "module" or dormitory with up to 64 inmates. Each inmate has a cell with a toilet, sink, mirror, and bed. Inmates eat and participate in programs in a common day room area equipped with tables, chairs, and telephones. This scenario allows the officer to be the leader of the module and puts the officer in a position to know and understand the personality of each inmate. Direct supervision units have proven to be safer for both staff and inmates. Main Jail North is designed to house up to 919 inmates.